We have launched our new Adult Learning Course Brochure for 2022-23. The Brochure includes information on courses, skills for work, Apprenticeships and funding available to help you study. To find out more contact us on 0191 6432288 or e-mail: curriculum.support@northtyneside.gov.uk.

Here at the Adult Learning Service we had a wonderful celebratory afternoon at the Langdale Centre to celebrate all of the hard work, success and dedication of the 19 learners who all recently achieved their Ncfe/Cache Level 3 SENCo Qualification.  Sadly not everyone could make it due to their work commitments but we had a great afternoon with tea and cakes and as you can see the learners are so thrilled to receive their certificates from Judith Rose, the NTC Early Years SENDCo, congratulations everyone, you so deserve it!

As a training provider we are very committed to supporting Early Years Settings in North Tyneside to upskill their staff and to contribute towards a qualified, highly skilled, passionate and dedicated Workforce. What an achievement for these ladies, Tutors Michelle and Gillian are so proud of them! 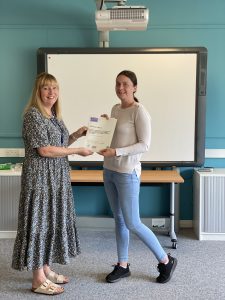 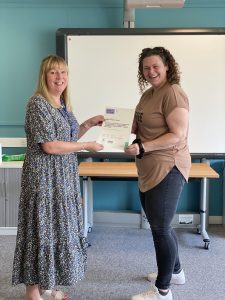 Here at North Tyneside Employment & Skills, we love to shout about our successes; more specifically our learners successes. This is what Kim Nash, Early Years Assessor and Tutor had to say regarding the students below.

A massive well done to the below learners. You have all been working tirelessly over the past few months of your apprenticeship and have managed to achieve at least 50% of your Early Years Qualification and Skills, Knowledge and Behaviours towards your overall apprenticeship. We are proud of you!

Received the silver certificate for achieving 50% of her apprenticeship ahead of target.

Ellie – Holystone Out of School Club

Received the silver certificate for achieving 50% of her apprenticeship ahead of target.

Received the bronze and sliver certificates for achieving 25% and 50% of her apprenticeship ahead of target.

Even though she is a very busy mother of 3, Maria was eager to develop her own skills so that she would be both prepared to return to the workplace and so that she could help her children more with their school work in an increasingly digital world.

Maria began with brushing up her English and Maths skills, but she was not content with just the basics, as she worked up to studying her level 2 in both subjects and made a start on level 1 ICT. By this time, the whole country was in lockdown, but this didn’t deter Maria one bit, she continued supporting her children with online lessons from school at the same time as working towards her own qualifications via Teams and by working at home whenever she could.

All of this would be a daunting task for any learner returning to education, and not only is Maria a super-mum, she has also achieved all of this in her second language, translating everything for herself into her native Romanian

Maria says she feels really good about her achievements, she feels very confident and very proud of herself that she has been successful. She didn’t want to do distance learning courses because she learns better in-person but she says poor Nat putting up with her struggles She feels much more confident about getting herself a job. She was frustrated before, trying to do her coursework during lockdown  when there was no one on hand to ask, no one to explain things; with a different language she sometimes just needed a quick explanation of some of the tasks/criteria. She is embarrassed to say that she didn’t feel she would be able to pass any qualifications but oh my word look at her now, she did it and she is explaining to her children that “I can’t” doesn’t exist, if you think it, and you want it then you can do it! 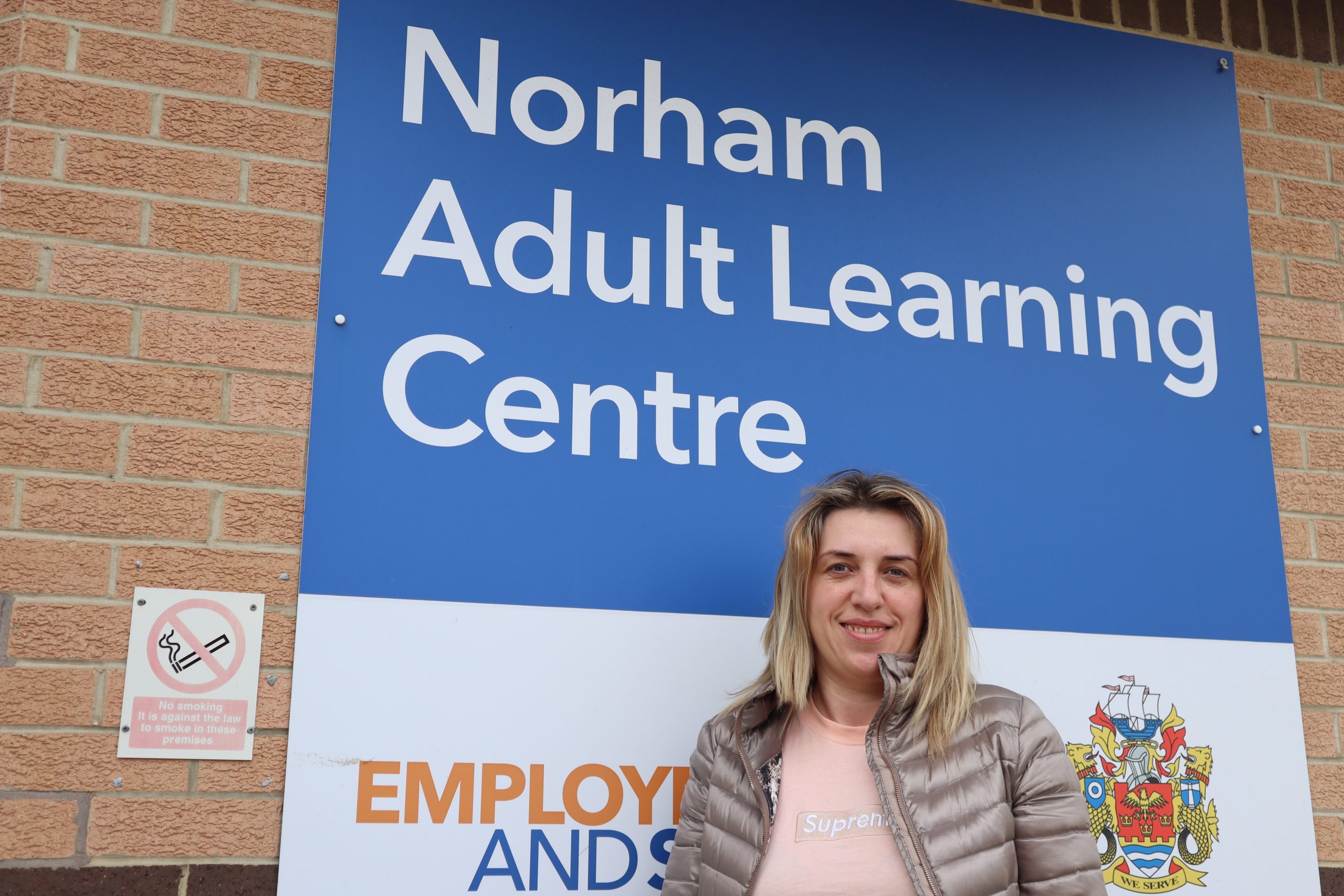 SEND Ignite Your Potential is a specialist programme has been designed to support young people with special educational needs and disabilities (SEND) to prepare for adulthood offering progressive skills development in areas including Health, Independent living, Community inclusion and employment and a foundation of English, maths and digital skills.

This year 4 students were offered places on  the NHS Project Choice.

From the cohort 2021-2022 of the 5 students accepted on NHS last Year 2 students have successfully gained paid employment; James Durdin and Paul Harrison

Both have offered roles as Facilities Assistant role with the Facilities Dept. with NTW Solutions. CNTW NHS Foundation Trust.  They will be working across the NHS Trust within domestics and portering. The remaining 3 will be attending interviews over the next few months.

Here at North Tyneside Employment & Skills, we love to shout about our successes; more specifically our learners successes. This is what Kim Nash, Early Years Assessor and Tutor had to say regarding the students below.

Well done on all your hard work and dedication so far! You have all been working tirelessly over the past few months of your apprenticeship during extremely challenging times and have managed to achieve at least 25% of your Early Years Qualification and Skills, Knowledge and Behaviours towards your overall apprenticeship.  We are all extremely proud!

Posted on 7th March 20227th March 2022 by Ryan Hucks
Working Well North Tyneside supports people into employment, training and volunteering.
Help us develop a service that works for you!
We provide employment and skills support including information, advice and guidance, links to employers and skills support including confidence building and employability skills.
There are a wide range of partners involved in Working Well North Tyneside including the NHS, North Tyneside Council, DWP and the community and voluntary sector.
Whether you need advice about employment, health, debt, housing or skills, join us for a chat.
We’ll be in the Beacon Shopping Centre Monday to Friday 11am until 3pm between the 7th and 18th of March.
Press HERE for more information.

Here at North Tyneside Employment & Skills, we host an event every year called ‘Get Up & Go’. This event’s purpose is to let young people and their parents/carers find out about Apprenticeships and the opportunities available. This year’s event helped people explore what career paths are out there for themselves.

This years event was on Saturday 12th of February, which turned out to be a roaring success.

Look below to see all of the statistics from the event, and we hope to see you there next year.

The main purpose of the role will be to offer administrative support to the Nursery. The successful candidate must be able to work using their own initiative, be well organised and a good communicator.

You will develop a wide range of transferable skills that will be highly sought after across all sectors.

Your role will add value to the Nursery where you will interact with both internal and external customers.

You will contribute to the efficiency of the organisation through supporting teams and resolving issues where appropriate.

You will be required to use your initiative and manage priorities using problem solving skills.

Business Administrators have the potential for people management and this is an excellent opportunity for people wanting to progress into management in their career.

Press the link below to see more information:

We caught up with Chloe Thompson, a former apprentice at Accenture, to speak about how an apprenticeship has benefitted her career and why specifically our Get Up and Go event really benefitted her.

This is one of many videos we captured to highlight the brilliant work of both apprentices and employers, so look out for future content throughout the week.

Press below to watch the video.

Was this page helpful?